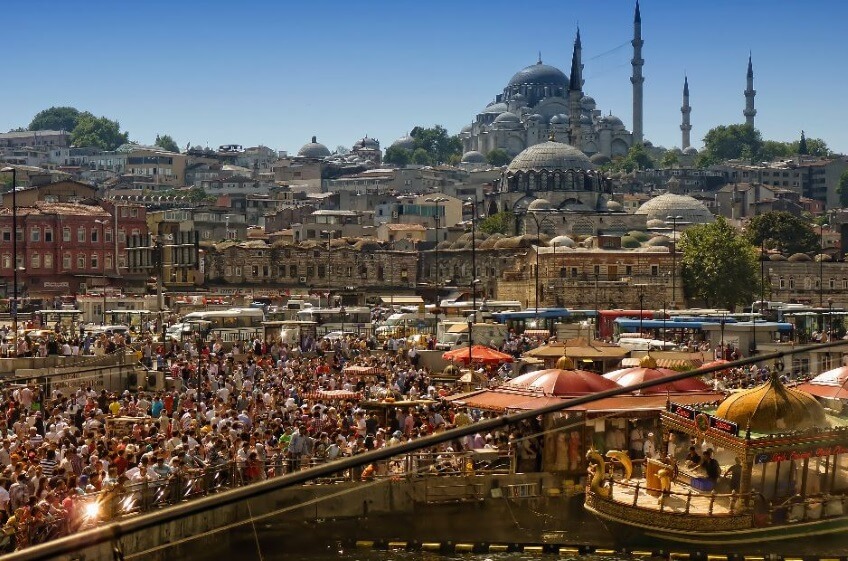 Istanbul is a bridge between two continents, a meeting point of western and eastern cultures and an invaluable historical heritage of all mankind. This is an amazing and beautiful ancient city that was once the capital of the Byzantine Empire. It is the only city that is located in two parts of the world at the same time. Istanbul is the biggest city in Turkey and one of the largest populations in the world – more than 13 million people live here. All the sights of Istanbul are difficult to describe in a few words, so we will focus on the main tourist destinations that you should visit with your loved one.

This unique historical monument is a masterpiece of Byzantine architecture, a symbol of the flourishing of Christianity and a witness to the death of the Byzantine Empire. Of course, this is the most remarkable landmark of Istanbul.

The cathedral was founded during the reign of Emperor Justinian in the 6th century AD. Until the 15th century, Hagia Sophia was the main Christian shrine. For 14 centuries of existence, it was destroyed and devastated several times. After the conquest of Constantinople, the temple was converted into a mosque. Nowadays, Hagia Sophia is a museum with a rich collection. The size of the building and its decoration amaze any imagination.

The luxurious Blue Mosque is considered a true symbol of Istanbul. A distinguishing characteristic of the mosque is six minarets, instead of four traditional ones. This is one of the most magnificent and beautiful mosques in Istanbul, which amazes tourists with its luxury architecture and decoration. The architecture of the Blue Mosque is a harmonious combination of Ottoman and Byzantine style. The mosque got its name due to the use of blue and white ceramic tiles in the interior.

One of the most romantic places in Istanbul is under the ground. This Basilica Cistern is a reservoir more than 1500 years old where people kept a supply of drinking water in case of drought. The reservoir was built from locally improvised material – marble columns of ancient Greek temples. There are 336 such columns in the Basilica Cistern. This is the perfect place to take a break from the heat and noise of Istanbul. And the amazing lighting of the colonnades will surely make a walk through the museum one of the most vivid memories with a loved one.

The Bosphorus Strait is the maritime border between the Asian and European parts of Turkey; it is often called the “soul of Istanbul.” The strait is arched over by several picturesque bridges, on the banks, there are magnificent sultan’s palaces, fortresses and ancient quarters. One cannot imagine Istanbul without the Bosphorus. This narrow strip of water was the subject of controversy between states and the arena of military clashes many times.

This is the central square of the historic district of Beyoglu. It separates the old quarters of Istanbul from the new ones and serves as an important transport hub of the city. In the center of the square, there is a monument created in honor of the formation of the Turkish Republic. It consists of sculptures of military leaders Kemal Ataturk, Fevzi Chakmak, Mustafa, Ismet Inonu and other revolutionaries who contributed to the fall of the monarchy.

This is a pedestrian street connecting Taksim Square and Galata district. Once, this alley was the central avenue of Constantinople. The name “Istiklal” is translated from Turkish as “independence”. On the street, reign the spirit of freedom and independence. It is full of tourists, nightclubs, restaurants, and low-cost eateries. Here, at a distance of one meter from each other, there are temples and street performers, and modern bars are adjacent to traditional Turkish shops.

This is the best place for shopping and the sixth largest shopping mall in the world. On 6 floors, there are about 400 shops, dozens of cafes and restaurants. As in the leading European capitals, here you can find products of all the most famous global brands, ranging from democratic brands and ending with designer houses. In the underground part of the building, there is an amusement park. Shopping in this place will appeal to any woman, especially to a beautiful Ukrainian girl. Find out more information about Ukrainian women dating to know how to make such a woman happy.

It is the largest indoor market in the world with an area of 3.7 thousand m². This is a whole “city in the city” with its own way of life, rhythm, and laws. The bazaar consists of 66 streets and 4 thousand shops and stores. There are mosques, a school, a bathhouse, a café, currency exchange offices, and numerous warehouses. Every day, the market is visited by thousands of people.